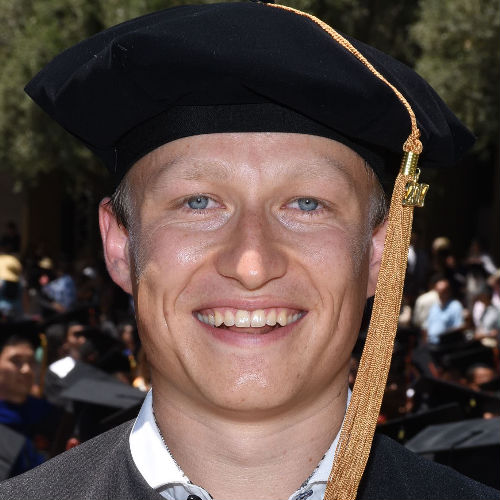 Anton received his BS, summa cum laude, in chemistry from Queen’s University (Kingston, Canada; 2011) and his PhD in chemistry from the laboratory of Nobel Laureate Bob Grubbs at Caltech (Pasadena, CA., USA; 2016) where he held Dow-Resnick, NSERC, and Bristol-Myers Squibb research fellowships.  An organic chemist with expertise in pharmaceutical science, medical imaging, green chemistry, chemical synthesis, and energy, Anton has authored 10 peer-reviewed scientific publications and over 35 patents and patent applications in the last 5 years. These included seminal papers in Nature (2015) and Nature Energy (2017) that were featured by NASA, Scientific American, The US National Science Foundation (NSF), The UK Royal Society of Chemistry, and others.

Anton and his team at Caltech were the subject of a documentary, Element 19, which premiered in April 2015 in Pasadena. The technology described in that short film now forms the basis for a start-up company, Fuzionaire, of which Anton is the Co-Founder and CSO. Anton is also a Director at KorvaLabs, which performs chemical analytics for clients in the professional sports, forensics, medical, pharmaceutical, agricultural, and food and beverage industries.

When not being a huge science nerd, Anton can be found either on the soccer field, on some course trying to learn golf, farming potatoes in rural Ukraine, at an LA salsa club, entertaining and cooking, or simply enjoying the landscapes of Southern California with family and friends.