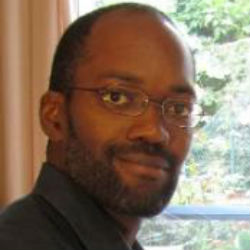 Professor Clifford V. Johnson’s work in science ranges from teaching and research to public outreach where he strives to put science back into the general culture. He helps artists, writers, and filmmakers incorporate science into their work; appears on several TV and online shows; gives public lectures and participates in panel discussions and other events. Johnson recently wrote and illustrated a  non-fiction graphic novel featuring science called The Dialogues, published by MIT Press. His research is part of the international effort to understand and describe the origin and evolution of the Universe and its fundamental constituents. He works mainly on superstring theory, quantum gravity, and M-theory, studying objects such as black holes and D-branes, using various techniques from Mathematics and Physics.